At the request of a number of expert anglers who have enjoyed the delights of this sequestered retreat of brook trout — the genuine Salmo fontinalis — for years, I send you a brief description of the country, made famous by Craddock's "In the Tennessee Mountains." and of a fishing excursion just concluded. I do this for the information of those who truly love the sport, and who will be gratified to discover new streams and new scenes in which to spend their fishing vacation.

I am seated in a log cabin that has withstood the storms for over a quarter of a century, in view of that huge archaean pile, Grandfather Mountain — summit of ranges that never disappeared during the convulsions of millions of years — and at the foot of the knoll on which this cabin stands are the lovely meadows through which ripple the pellucid waters of Elk River after its animated descent. Down it has come from its source in a foothill of Grandfather, over boulders and beneath blooming laurel (rhododendron), with banks bordered and pools shaded by ivy (kalmia) and honeysuckles (azaleas), pausing here and there to afford shady retreats for its royal inhabitants, and again dashing over rocky impediments until it reaches the pebbly channel of the Banner Meadows. Through these it sings and laughs, hiding its "beauties" under an occasional clump of laurel until it reaches the rocky rapids that lead on down to Smoky and Scaly mountains. And every pool at foot of rapids is alive with trout — a fish that above all others that swim, can thrill the nerves most deliciously when struggling on a brown hackle that has hooked him securely. And this Elk is but one of three limpid rivers whose sources are found in that foothill a couple of miles beyond the meadows.

This charming spot, with its sublime mountain surroundings, five or six thousand feet above the tide, and forest-clad on their tallest summits, is never visited by anglers from the North because Bohemians have defamed and ridiculed these mountains out of consideration. Never was a greater wrong done to fishermen. For eight years successively and in the month of June the anglers of our city have gone to Banner's Elk, and been welcomed with a hearty, simple, dreamy hospitality found nowhere else out of these mountains; have been fed on well cooked and wholesome food at Mrs. Louis Banner's and have caught thousands of trout ranging in weight from six ounces to one pound. True, these pink-dotted darlings are not so large as can be found in some streams of the North, but they are just as gamy when hooked, and just as delicious when lifted from the frying pan.

Banner's Elk, headquarters for movements on the Elk, Watauga and Linnville rivers, is reached by the East Tennessee, Virginia & Georgia Railway to Johnson City, twenty- five miles south of Bristol and about 200 miles northeast of Chattanooga. The East Tennessee & Western North Carolina Railroad connects at Johnson's and will transport you to Cranberry, thirty-five miles distant in the mountains, where there is a gem of a hotel kept in Northern style. From Cranberry you go in a hack or on horseback, as you prefer, to Banner’s Elk, eight miles distant. At Banner's Elk you can be accommodated at S. M. Dugger's, who keeps a regular boarding house, or at his father's, a farmer who takes in fishermen. Our club, including our ladies, always stop at Mrs. Louis Banner's, but as only ladies compose that family they are sometimes timid of entertaining those they do not know, realizing, no doubt, that few strangers turn out to be angels in disguise. Board is one dollar a  day, and it is excellent for the mountains of any part of the country, railway ride from Johnson's to Cranberry carries you through the Great Portal — the Doe River Gorge — into the Alleghanies. This gorge pierces the mountain that swings from the pillar of the Smokies — Roan Mountain — and latches on the pillar of the Blue Ridge — Grandfather Mountain— both of these lofty elevations entering the clouds 6,000 feet above the sea. The Doe has ground down a channel through this rocky spur, in places 1,000 feet deep, and alongside its rushing waters the railway ascends up grades 300 feet, and around curves as short as 20°. Now it is on a level with the stream, again it is 100 feet above; now the iron horse pants so close to the rear coach you can almost toss a cigar to the engineer five car-lengths away, again it dashes into a short tunnel that pierces a section of the Potsdam vertebra. The peaks reach up into the clouds, usually clothed with pines, maples, beeches, linns and balsams, but occasionally exposing bare piles of rocks hundreds of feet perpendicular, which at times shut in our train as securely from sunbeams as if it was in the bottom of a deep well. Over the clear, cold water project fringes of blooming laurel, ivy and honeysuckle.

From Cranberry the road ascends on the bosom of the mountain that bounds Cranberry River on the south, affording snatches of lovely mountain views. After three miles you ford the Elk and then you ascend that river. If you come in June not only will the oaks, the maples, the hickories, poplars, chestnuts, cherries, linns and beechies and balsams clothe Smoky and Scaly, but the laurel will have on its glorious white plumes, the ivy its delicately tinted and dotted clusters, and the honeysuckle the great redly golden blossoms that are the glory of the mountain sides all through Western North Carolina. For over three miles you will ascend through bough-embracing forests, along the bosom of the mountains at whose feet the Elk tosses, tum- bles and swirls, the water of which is clear as crystal, cold as ice and filled with speckled trout. Only the young and agile fishermen venture on these boulders, and they are always repaid with creels full of the largest fish found in this section of the mountains.

In the low mountain, three miles from Banner's Elk— a foothill of Grandfather— rise the Elk, Watauga and Linnville, and the springs of their sources are not a thousand yards apart. The Watauga leaves the feet of Grandfather, flows on by Valle Crucis to the Tennessee and thence through the Mississippi to the Gulf of Mexico. The Elk commingles in the same flood. The Linnville, however, pours down through a deep rift in the Linnville range, and after tumbling over a precipitous ledge one hundred feet perpendicular, it hurries on between the gloomy wall of a deep canon to the valley and thence to the Atlantic Ocean. I am told by those who have followed the course of the Linnville from its source and gazed upon its rapids, pools, falls, carious and beetling cliffs, that there is no sublimer scenery to be found anywhere on the continent

It has been a wet June all over the country and these mountains have not been exempt from the discomforts of showers. We reached Banner's Elk on June 13 for dinner, and at 5 that afternoon began our first assault upon the gamy inhabitants of the Elk. Only three of the four men were in this first engagement and one of these was hampered by the presence of ladies who attempted the sport for the first time, yet when darkness fell, after two hours of whipping, there were discharged from the three creels upon the floor of the porch seventy-five toothsome beauties, and over twenty had been thrown back to grow larger by next year. From that evening on we found the brown hackle and the king of the waters or the coachman the most attractive flies.

We never caught a large trout on a miller, though sometimes a little fellow would rise to it. Tuesday we fished with three flies on a six foot leader, a brown hackle always at the tail, then a king of the waters or a coachman and a miller or another hackle.

From Banner's Elk an excursion is made through the McCandless Cabin Gap to the sources of the Watauga and Linnville. It is for a while up the Elk, then through the dense laurel and up the precipitous face of the foothills, with a soil of leaves and woods decayed during centuries, twelve inches deep, covered with trees of fifteen feet girth, and ferns and mosses that are as beautiful as found anywhere else on earth. There is excellent fishing in the Watauga, beginning a little after you leave Callaway's, a mile or so below the source of the river. At Callaway's you can ascend to the summit of Grandfather, from which can be obtained an almost limitless view of mountain scenery. From Callaway 's you can fish down to Shull's Mills, where the river makes a short turn to flow out into the valley of Valle Crucis. That journey will be an unalloyed delight — mountains, valleys, laurels, ivy, honeysuckles, dancing rapids, flower-shaded pools, trout large and plentiful. At Shull's Mills is Boone Fork, full of trout, and Joe Shull's residence, a reasonably comfortable lodging place. It is better to take lunch from Banner's and avoid the wretched cooking at Callaway's.

Returning from Shull's Mills along the highway, you enjoy the scenery to the full. After passing Callaway's you reach the Linnville, and in about three miles excellent fishing, You fish on down to Webb's Pond and spend the night at Estes, a half mile beyond; reasonably fair entertainment. In the morning you can go to Linnville Falls, then across to Martin Banner's for dinner, where you will get an excellent meal. You will now be only five miles from your feather bed and big wood fire at Mrs. Banner's, at Banner's Elk. One pressed for time can fish the Watauga to Shull's Mills, ascend to the summit of Grandfather, so down the Linnville to the falls, and be back to Banner's Elk within three days, after having a bushel of sport and a barrel of enjoyment.

There are other streams in Western North Carolina where trout are as plentiful and perhaps larger— as, for instance, the Nantahala, Toe (Chestatoa) and Pigeon — but my heart turns lovingly to the Elk, Watauga and Linnville, and my homelike home at Banner's Elk. My residence is in Chattanooga, Tenn., and I will cheerfully answer all letters of genuine anglers who may wish to learn more of these arteries of the heart of the Alleghaniea. G C. GeiTNOB. 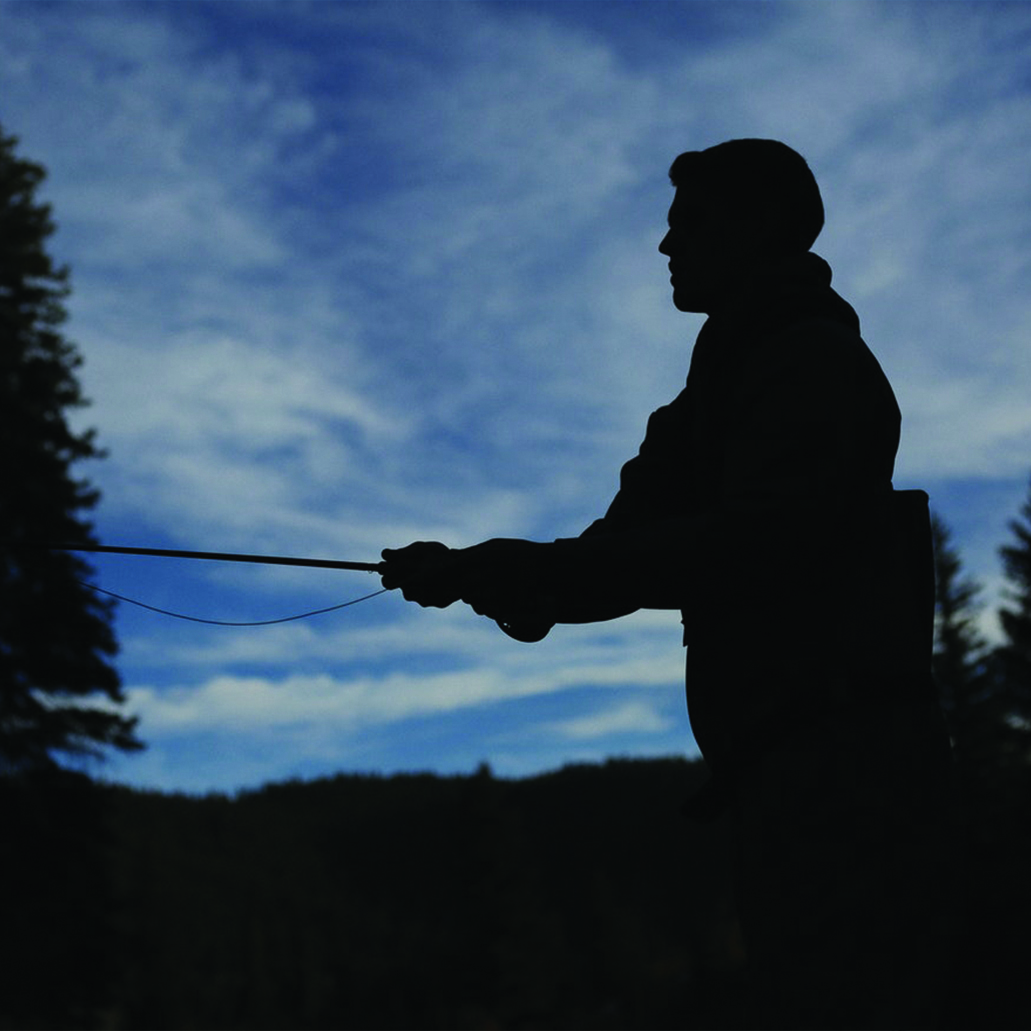